VANTIEGHEM TALEBI is an international architecture and design practice established in 2016 as a collaboration between founding partners Paul Vantieghem and Raha Talebi; dedicated to the betterment of design environments of all sizes and things of beauty. The partners run their eponymous design practice from USA and Switzerland. 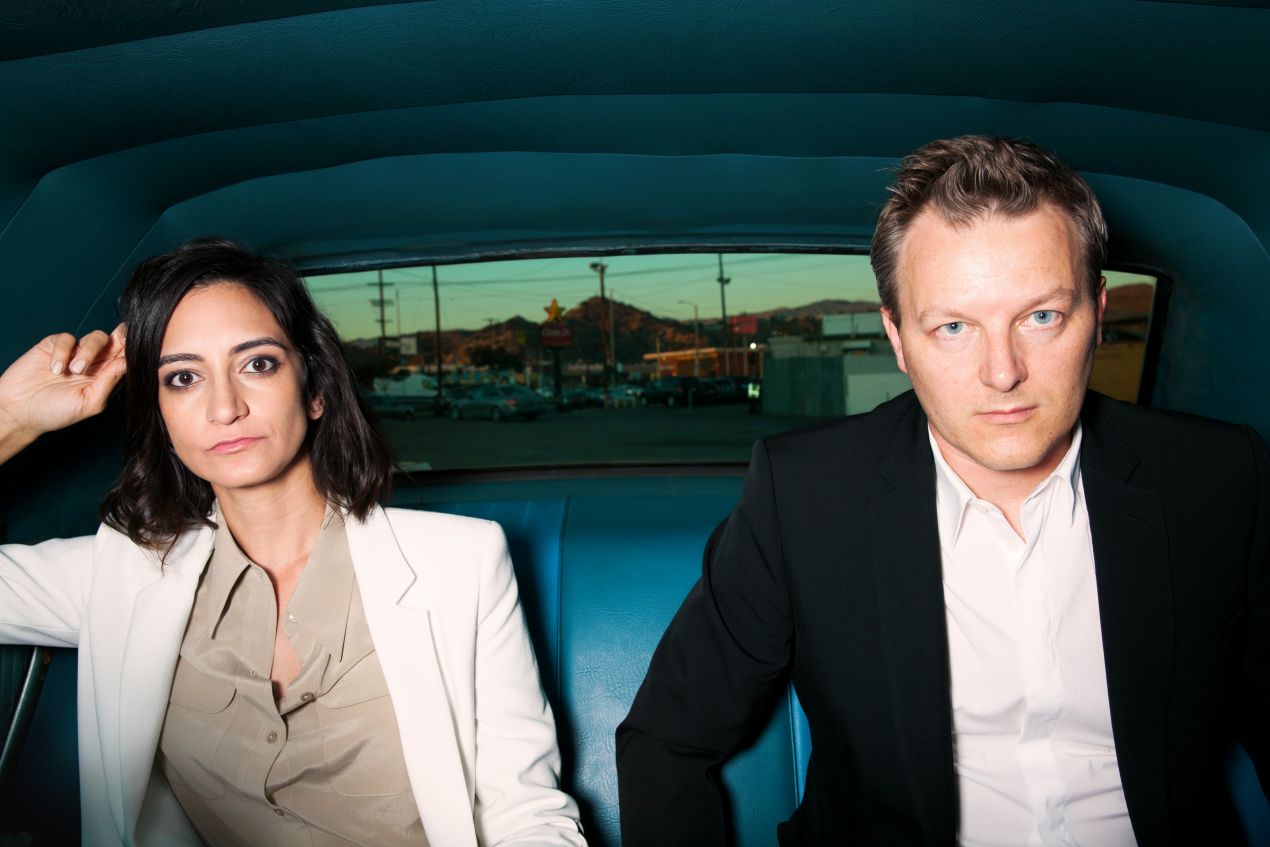 Raha obtained her Bachelor of Architecture Professional Degree from The Cooper Union for Art and Architecture. She continued her studies at The Harvard Graduate School of Design, graduating MArch II, Master in Architecture. She previously worked with international practices including FOA in London and Herzog de Meuron in Switzerland.

As a Senior Architect with Herzog & de Meuron (Basel, Switzerland), Raha was the Project Manager for international projects with a focus on cultural programs. These projects include the M+ Museum and Offices (Hong Kong) as well as The Powerhouse Arts in Brooklyn, New York; both projects currently under construction.

Raha is registered with SIA, the Swiss Society of Engineers and Architects.

Paul graduated from Sint-Lucas School of Architecture in Ghent (Belgium) and later studied architectural theory at the Katholic University Leuven (Belgium). Subsequent to his studies, Paul began working with Stéphane Beel Architects, realizing several projects during his time there, including the Courthouse in Ghent.

He then went on to join the architects’ practice of Herzog & de Meuron (Basel, Switzerland). He worked, amongst other projects, on the Tate Modern Extension in London before joining the Bordeaux Stadium competition team in 2010. As an Associate, Paul was the Project Manager for the Bordeaux Stadium, leading both design development and technical construction aspects. The project was realized in May 2015.

In addition to those collaborations, Paul has also planned and built his independent projects since 2002. He is registered with the Order of Architects in Belgium.

This is not another anonymous glass tower but rather a reprogramming of suburban living in the city.
An existing tilt up concrete warehouse is reused as an amenities base where residents can discreetly enter through, setting the stage for the stacked lofts and urban villas above where every unit holds panoramic views to Downtown Dallas and the Trinity River Valley floodplain. The glazed lofts that house the straightforward chevron truss mimic the scale of exising industrial lofts in the district, often used as studios or gallery spaces. With 360-degree gardens, the urban villas are an unique urban typology - providing the comforts of what is traditonally defined as a “home” within a tower. Together the two stacked spatial types create just enough variation where a resident on the street can point to their own “home” up high.

Rather than building in the style of the existing 1920s bungalow and 1980s Frederick Fisher atelier, the new addition bridges the two distinct structures. Completing this artist compound.

The lightweight structural concept of a timber framed upper level above a new ground floor pavilion touches down with minimal site impact. This allows for the existing bungalow to open up to a generous garden pavilion under an enfilade of sleeping, bathing, deck, and courtyard spaces above that continue the soft edge between inside and outside.

In collaboration with Mike Holz.

Currently under design for a Structural Engineer with a hobby for working on cars. The generous height of the car workshop is born from the scissor car lift requirement, creating a “jump cut“ connection between the two functions of the home; 1. private dwelling & 2. polyvalent car workshop. The house is a spatial collage of disparate functions. The three studies are projections of three different structural directions forward; consider them mise-en-scene projections of construction still images. A cinematic take on design process images. 1 of 3; Concrete frame + redundant steel column structure which allows for slender member sizes. 2 of 3; Concrete frame + cross laminated timber panel structure for ease of construction and internal finish. 3 of 3; Concrete slab + steel chevron truss to allow maximum internal flexibility.

Built from structural and zoning constraints, a new construction is placed on top of existing foundations and is limited to maximum allowable height. As such, the design grew out of the foundation’s asymmetrical cruciform geometry where each structural bay of the cruciform created a “house of cards”.
The independent bays were prefabricated from CLT (cross laminated timber) panels and bridged together on site via the final roof formation. The complex CLT geometry and subsequent fabrication is unique and was assembled on site within a week. The project’s fusing of structure and volume minimizes additional interior finishes. In the living area, four CLT floor panels are exposed in the ceiling; this pure structural expression alternates between the gypsum board panels of the suspended ceiling. The CLT panels are exposed in the pitched upstairs bedroom ceilings as well as in the ceiling of the central top floor hall, thus showing the full extent of the triangular structural bays.

The project envelope is built as a timber rain-screen made of chemically seasoned Douglas-fir battens. Considered a facade element due to the steep pitch, the roof is also built from the same timber rain-screen and construction technique. In order to streamline construction and avoid visible screws or nails in the timber battens, the battens were prefabricated as assemblies prior to being brought on site. The project details consider the larger impression of the project as an abstract volumetry, for example, all gutters and drainage elements are concealed behind the rainscreen with minimal impact on the exterior surface.

Interior elements such as the central staircase highlight the opportunity that the column free prefabricated CLT structure allows, visually floating in the space; suspended off a wood floor grid that spans between the CLT bays. Integrated into the house is a Type D central ventilation system with heat recovery as well as rain water collection and re-use.

Exterior pedestrian and car access is through discrete concrete retaining walls that carve out of the restored dune landscape.

The geometry of the house is reminiscent of historical beach house architecture in the area, characterized by steep roof angles. This, and the restrictions of the existing foundation, steered both the structural and architectural logic of the project.

The House for David is a project that celebrates tension.
The existing convex site geometry established the first drawn line of the project; a concave boundary along the easternmost site boundary.
Under tension, these two lines together created “space” between each other, while introducing softness to the designed volume. The sense of duality continues in the material choices for the project, the soft form was built up of materials originally intended for industrial use; such as undulated-perforated metal, fiber cement board and burnished concrete.

The design is born from a requirement to continue the local vernacular architecture in both volume and materiality, therefore designed from the inside out.
Intersecting geometries in plan and section were physically modeled, arcs and lines inscribed, poché carved out. Two elliptical volumes carve out space under the roof valley, giving movement to dedicated circulation spaces and open up to all the ground floor programs. These soft poché spaces hold various functions such as a fireplace, a wood burning stove, bathrooms, techincal space and built-in millwork.
The timber facades pinch inwards under the cantilevered roof while the roof maintains the required historic volume periphery, creating large covered spaces underneath the North and South overhangs. The envelope is comprised of vernacular brick wherever it aligns with the historic volume periphery.

A pile of aggregate in the city

“A concrete house for a concrete plant.”
The Interbeton project is an architectural answer to a complex technical and urban question.
Cities continue to develop as do their needs. Urban morphology adjusts to housing and density needs but there are particular industrial fabrication facilities that require a central position in the city. Concrete factories are one such actor in the city; as they need to deliver to the immediate surroundings. Interbeton is a prime example of a “productive city” concept which was the starting point for this invited competition.
As a reaction to the rapid emergence of housing and commercial projects in its vicinity, the city of Brussels called for a reduction of dust at the concrete factory site. The design was consolidated into 2 houses; the storage house and the corner house. These houses were conceived as a phased approach, allowing for operations to continue during various construction phases.
The storage house is a structure dedicated to the storage of raw material; granulate and sand. Driven by the natural, micro-formation of sand and gravel’s angle of repose; the geometry directly reflects this principle as well as the pitched industrial harbour buildings along the Vergote Basin. The storage house roof also extends to contain the noise of continuously running concrete trucks.
The immediate availability of concrete as well as the cost-efficient method of a gliding cast drove the choice of cast in place concrete for the forms. By using the particular concrete mixture that is available at the day of each pouring phase, the design expresses the subtle gradient of the daily mixture – a celebration of granulates.
An unused strip of land, bridging the corner of the site was dedicated to the future office space for Interbeton, the corner house. The same construction principles were applied for this Phase II project element.
The site reorganization around two houses allows for the factory footprint to significantly reduce, therefore liberating a substantial canal-side urban “balcony” to be developed as well as semi-public access to the boardwalk running along the Canal.

The design was born from the question of how to build in a suburban neighborhood without fences while maintaining a sense of escape by framing the tree canopy view. Typical ground floor spaces are elevated to the upper level, bridging over the entry and driveway that carve out a path between the elevated lap pool and stacked home.

A1960s apartment renovation as a study in detailed interventions; approached as a large piece of furniture. The material palette is “native” to the apartment building, revisiting new elements in terrazo, oak and massive stainless steel.

The Lindenwood residence is designed as a micro-climate, using simple building principles to battle extremes in Texas weather; between strong sun, flash floods and cold winters. Rather than tacking on “green” devices, the holistic design looks to architectural elements that work together in forming a micro-climate; including orientation, tall screens, overhangs, moving water and a carefully integrated landscape.

The inner yard helps moderate the prevailing South and North winds while still allowing for natural ventilation through the slotted 16’ tall screen along the Western portion of the site. This screen dually serves as the first entry threshold into the project into the inner yard while serving to complete the volumetric expression of the project’s volumetry. The dense oak tree canopy lining the screen helps further protect against the high sun during strong Summer sunsets while also filtering the horizontal light in the Winter in order benefit from the heat gain. The generous overhang above the pool helps to cool down the Summer breeze into the house during the Summer months while the heated spa portion can heat up the inner courtyard with warm air in the Winter.

Four raw material choices without additional finishes such as exposed solid timber, blackened board/batten facades and screens as well as exposed in-situ concrete, continue the idea of a house that provides an escape from the day to day elements. Greenery itself is thought of as the 4th material.